The second issue of our Parish Bulletin is dedicated to the Saints of the British Isles and, especially, of Scotland. The cloud of holy men and women who lived and died in Christ during the time prior to the tragic division of the Christian world (gradually effected between the 9th and 11th c.) are the most precious fruits of this hospitable land.

Once a British Orthodox priest wrote that the British people who convert to Orthodoxy do not embrace an exotic, imported form of Christianity; they return to the faith of their Fathers. This is a truth anyone can verify by reading the lives of the early British Saints. The many holy monks who lived on these Isles led lives strikingly similar to those who struggled in ascetism in the deserts of Egypt or Asia Minor. The decentralized organization of the Christian communities around an "Elder", the importance of inner prayer and the general liturgical life of the early Christians in this country reveal a surprisingly close connection with the Orthodox East.

In recent times, by God’s Grace, there has been an ever-increasing awareness and veneration of the Saints of the British Isles in traditional Orthodox Countries. In Greece, the newly canonized St Porphyrios of Kausokalyvia, is known to have been very fond of the British Saints. Following his advice books have been written about the them and chapels have been dedicated to their memory.

From the much loved all over the Orthodox world, St Paisios, we have learnt about the amazing prophesy of his God Father, St Arsenios of Cappadocia: "When the British Saints are honoured in Britain, Orthodoxy will flourish again on that land".

Let us all then discover the lives of the British Saints and be inspired by their love for Christ. We will be moved by their simplicity of manner and their total commitment to the Gospel. Let us ask for their intercessions. Their prayer avails much! Also, let us try to continue, in some way, their work: to help more people come to Christ and to embrace the True Faith, primarily, by being ourselves faithful Christians.

The British Isles have a long history of Christianity going back to the earliest years of the Church. A number of traditions exist about how Christianity arrived here. The earliest attested tradition is that St. Aristolbulus (one of the Seventy Apostles) was the first to preach in Britain. A later tradition states that St. Joseph of Arimathea came to Britain and built the first Christian church here at Glastonbury.

In 563 an Irish monk, St. Columba led a mission to the pagan Scots of Dál Riada. He established a monastery on the island of Iona which became a centre of mission to both the Scots and the Picts.

A new Deacon for our Parish 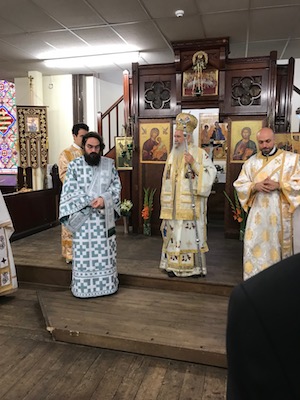 Sunday 22nd July was a day of great joy for our Parish. Our Archbishop Gregorios of Thyateira and Great Britain served the Divine Liturgy and ordained Christos Kakalis, a lecturer of the School of Architecture in the University of Newcastle, a Deacon naming him Antonios. The new Deacon has been a member of our Parish for many years though he had to be away for some time because of academic commitments. Fr Antonios will serve in our Parish on weekends while still teaching at the University on weekdays.